For most of the second half of the nineteenth century the Launceston Mechanics' Institute's library books were rebound locally by Alex Thomson. Many hundreds of the surviving titles carry  Thomson's bookplate and his distinctive brown half-leather bindings

Alexander Thomson, Jnr, a Scotsman, and his wife Isabella were both apprenticed as bookbinders at W and R Chambers in Edinburgh, later famed as the publishers of Chambers Encyclopaedia.
Alexander Jnr and Isabella came to Launceston under engagement to Henry Dowling, around 1849.
Dowling had printed and published a Tradesman's and Housekeeper's Diary in 1836, and a pirated edition of The Posthumous Papers of the Pickwick Club, in twenty-five parts from August to December 1838; they were followed by lithographed illustrations and in July 1839 by a bound volume, claimed to be 'the largest publication which has issued from either the New South Wales or Tasmanian Press'. Dowling helped to produce the Launceston Courier in 1840-42, the Teetotal Advocate in 1843, the monthly Van Diemen's Land Temperance Herald in 1845-49, and, most notably, John West's The History of Tasmania in two volumes in 1852.[1] 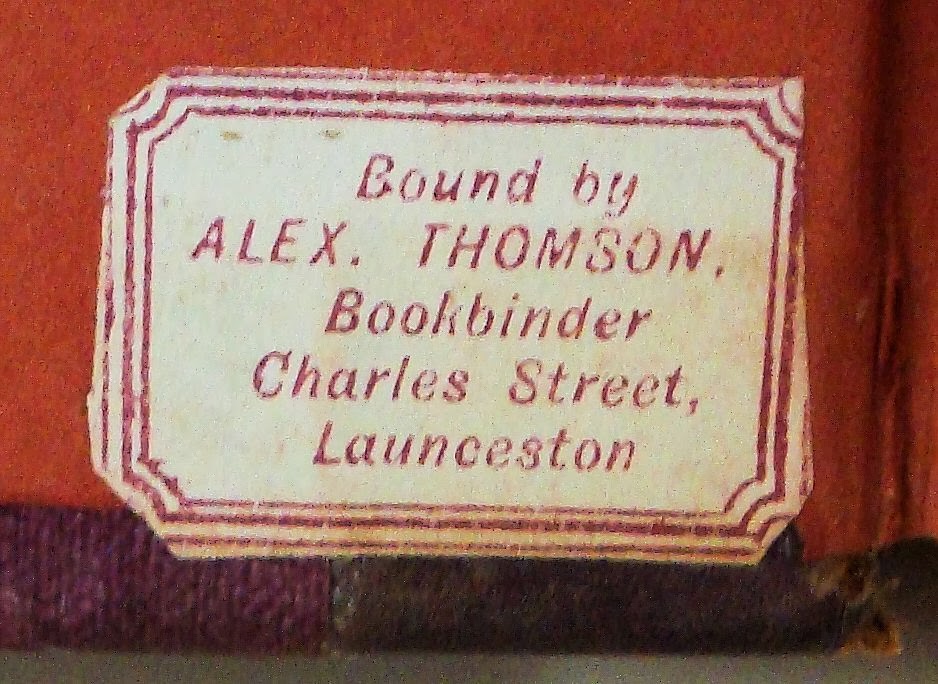 In 1853 Alexander, bookbinder, Charles Street, adjoining the Cornwall Chronicle office, advertised that he “executes every description of binding, both plain and ornamental, gilt or marble edge, Law, Music Books, Portfolios etc. Account books made to order."[2] In January 1854 Alexander was also advertising his “Cheap Toy Bazaar” in Charles Street, opposite the Star Inn. 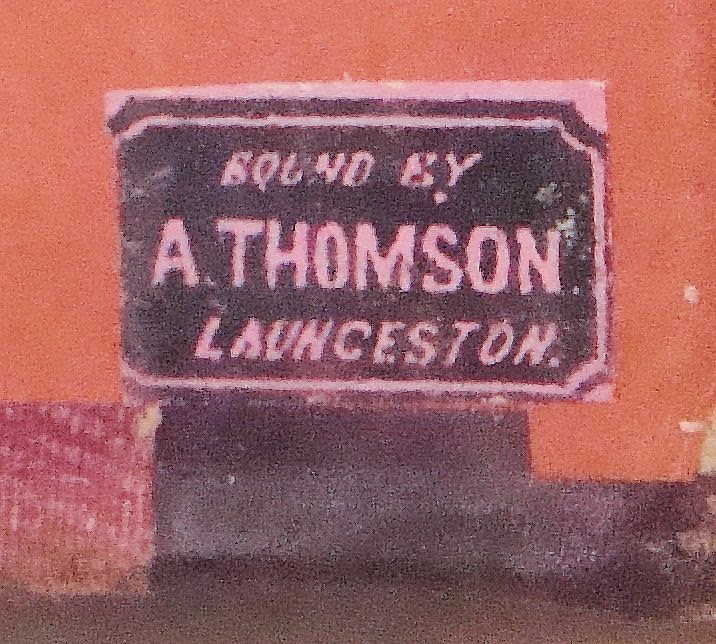 Alexander Jnr, died in Launceston on 20 April 1887. His son David Thomson, bookbinder, stationer and poster advertising agent, continued the family business until 1937 when he died on 27 April at his stationer’s shop, 144 Charles Street, at the age of seventy-five.
David's daughter, Isabella Jane Mead, was a notable Launceston historian, and Director of the Queen Victoria Museum and Art Gallery from 1950-1953, the first woman to head a major public museum in Australia.[3]
[1] Isabella J. Mead, 'Dowling, Henry (1810–1885)', Australian Dictionary of Biography, National Centre of Biography, Australian National University, http://adb.anu.edu.au/biography/dowling-henry-2237/text2419, accessed 4 February 2014.

The aim of this blog is to provide a brief outline of the history of the Launceston Mechanics' Institute and a more detailed description of the surviving or 'legacy' collection of its library. It explores the significance of the collection in a local and Australian context, and offers a model for resolving issues of ownership, custodianship, storage and future access. This blog also outlines the activities of the Friends of the Launceston Mechanics' Institute Inc., a group formed to save this important collection.